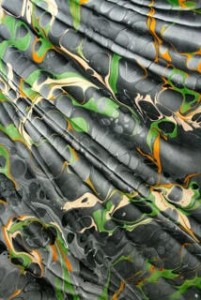 The object of marbling is to float colored 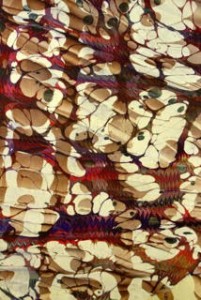 inks or paints on a liquid medium, manipulate the colors into a design, and make a contact print.  Specially treated absorbent paper is laid on the floating pattern and a single print is then made. No two patterns are ever alike, thus giving way to many creative possibilities.

The beautifully patterned marbled end papers and book cover papers intrigue many bookbinders, book collectors and craftspeople. Marbling is an exciting art. Watching paints flow on the water, take various forms and then transfer so easily to paper can seem almost magical.

The origins of marbling are somewhat obscure but it is known to have been practiced in Japan as early as the 12th century. Early marbling is called suminagashi.

Another type of marbling is called Ebru or Cloud art, evident in Turkey and Persia in the 15th century. By the 17th century Europe was introduced to marbled papers. English bookbinders used the marbled paper as end papers in their books.